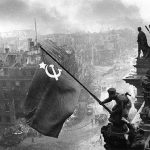 Nazi Germany was defeated by the Soviet Union.

The British and Americans and their allies made a substantial contribution, but without the German defeats on the Eastern Front, it is unlikely that Hitler would have lost. This certainly was the view of the Germans at the time.

Some idea of the ferocity of the fighting in the east may be gained from the fact that between 25 and 30 million Soviet lives were lost as a direct or indirect result of Nazi operations. At the beginning of the eastern conflict in 1941 and 1942, the Soviet Union helped to save Britain and the Middle East from invasion by absorbing the bulk of the Nazi war effort. It was in the Soviet Union that Nazi military weaknesses were first revealed and the first major defeats inflicted on the Nazis. Four years of operations on the Eastern Front consumed the great majority of Nazi forces including nearly all of its elite units.

Nazi Germany and its allies, the Axis, were not defeated by a two-front war. Although the contribution by British, American and other western forces inflicted serious damage on the Nazi war effort, nevertheless the Soviet Union on its own had mastered the Nazis well before D-Day, and well before western strategic bombing began to have any real impact. The Soviet Union was invaded after the western land front had been liquidated by the fall of France in 1940. The Nazis did not face a major western ground threat until the start of the Italian campaign, more than two years after the attack on the Soviet Union; and even then the commitment of relatively small German forces brought the allies to a virtual halt in central Italy. It wasn’t until D-Day in June 1944 that the Western Allies managed to tie down more than 40% of German ground divisions. Even then, many of these were second-line formations, the best troops and equipment being prioritised for use against Soviet forces.

In 1944 and 1945, General Eisenhower had just over three million troops under his command, with about a third of them remaining in Britain. These forces faced less than half that many Axis troops, of which the British Commonwealth and the Americans killed about 830 thousand. Those forces engaged against the Axis in northwest Europe and Italy lost about one hundred and forty thousand personnel killed and missing. By comparison, Soviet armed forces peaked at in excess of twenty million and were fighting Axis forces totalling up to nearly six million. During 1944 and 1945 alone, Soviet forces killed nearly two and half million axis troops as they fought their way to Berlin.

The following table shows the number of German divisions on the European and Mediterranean fronts:

To the forces of the Soviet Union, routinely fighting battles involving several hundred thousand on both sides, the approximately seventy thousand Axis troops defending Normandy on D Day were not seen as serious opposition. During operations in and around Stalingrad, Soviet forces faced nearly a million Axis troops; and this at a time when the Soviets lacked the overwhelming air and materiel support enjoyed by Eisenhower’s forces operating in Normandy and Italy. 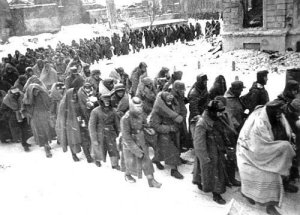 Nazi forces faced their first major defeat at the hands of the Soviet Union in December 1941 when Commander Zhukov mounted a major offensive around Moscow and drove the Axis back. The Germans themselves acknowledge that their forces almost collapsed at this point. At Stalingrad, a second massive Soviet victory confirmed that the Nazis were not capable of winning; and the great German retreat began after the huge Nazi failure at Kursk in July 1943.

While it is true that the Western Allies made a difference by putting an additional strain on German resources, it is clear that by themselves the Soviets still would have won. Consider German losses. In France during 1944 the Germans lost about 400,000 men during a period of defeat and retreat. This is less than half the losses they suffered during 1941 in the Soviet Union when they were winning and advancing. Furthermore these losses in the Soviet Union were suffered by the best that Germany had to deploy. In contrast, most of the forces destroyed in North-west Europe by Western forces were lower quality. Nazi losses continued at an accelerating rate on the Eastern Front after 1941 and the Western Allies were never able to inflict as much damage on Hitler’s forces as did the Soviet Union.

It is fair to say that Nazi Germany perished on the Eastern Front. Partly this was due to the scale of the landscape and weather, but it should be remembered that it snowed and rained on both sides, the summers scorched everyone equally. A kilometre was just as long for Soviet troops as it was for the Axis, the swamps just as boggy, the rivers just as wide, the mountains just as high. Soviet armour, artillery, aircraft, although initially many of them obsolete and poorly handled, came to be more than a match for their opponents. Soviet commanders learned hard lessons quickly and applied them ruthlessly. Above all it was the tenacious refusal of the Soviet people to give in that turned the tide against Nazism. The huge effort made to mobilize the people and the resources of the Soviet Union doomed Hitler to failure.

The Soviet Union managed to increase its armaments production even though the Germans in 1941 captured most major cities of the Soviet Union and most of the vital Soviet production centres, comprising nearly 60% of its pre-war industrial capacity. When attacked, the Soviet Union put into play a huge re-location project, moving over 1500 factories and one million workers and their families on 18 000 trains eastwards away from the invading Nazis. Despite the massive disruption caused by this relocation and by Nazi occupation, Soviet war production climbed steadily, finally outstripping the Nazis in quantity and quality.

The following table gives an idea of the scale of Soviet war production compared with other major powers:

Output of weapons by the Soviet Union and the Western Powers

The Western Allies did make a difference through lend–lease, the name given to the scheme for sending supplies to aid opponents of the Nazis.  Supplies of western materiel eased the burden on Soviet production. This, however, should not be over emphasised, especially as most western supplies arrived in bulk only after the turning points on the Eastern Front in 1942/43. Western-supplied armour, artillery and aircraft accounted for less than about 10-15% of total Soviet resources and, in many cases, were of lower quality or were less suited to operations in Eastern Europe and the Soviet Union.  Probably the most effective element of lend-lease were the approximately 400 000 soft-skinned vehicles such as jeeps, trucks etc., provided to the Soviet Union from 1942 onwards. These helped speed the rate of advance of Soviet forces, especially during the great strategic offensives in 1944 and 1945, but did not in themselves deliver victory. Ironically, it was these vehicles that probably guaranteed it was Stalin who occupied Eastern Europe rather than the West, although after the Yalta Conference it was perhaps likely that the Soviet Union would control this area. Consumables such as food certainly made life easier in the Soviet Union and supplies of cloth and boots probably made life easier for front-line Soviet personnel; but they didn’t win the war.

It was the courage and skills of the armies, navies and air forces of the Soviet Union that ensured the defeat of Hitler’s Germany and its allies in Europe; it was the tenacity, bravery and sheer effort of Soviet civilians and fighting personnel that defied their own destruction and turned the tables on the Nazis.

Without their individual sacrifices and endeavours, and the ruthlessness of Stalin and the Communist Party, it is unlikely that the Western Allies would have been able to liberate mainland Europe. Had Hitler defeated the Soviet Union and obtained access to its vast natural and human resources, it is quite possible that Nazi Germany’s dominance of Europe would have been assured for many years.