Adolf Hitler, leader of the National Socialist German Workers Party (the Nazi Party), became Chancellor of Germany in 1933. Shortly afterwards he abolished democracy and ruled as dictator until his suicide in 1945.   During his time as leader (Führer) he concentrated in his hands complete authority over the state. The Nazi Party was intolerant of individual self-expression; everything was subordinated to the dictates of the Party, and Hitler ruled the Party. All offices were subordinate to his position and had to depend on his instructions. 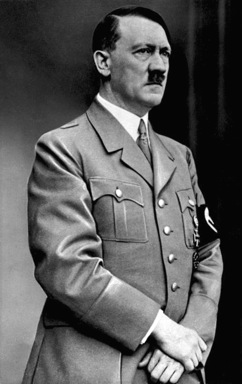 Individual rights were abolished and many people were imprisoned, deported or executed for opposing Hitler and the Nazi state. A special police force, the Gestapo (the Secret State Police – Geheime Staatspolizei) was established to root out dissent and enforce Hitler’s policies.  The media were under direct state control and all aspects of German life increasingly became Nazified as time went by.  The Nazis paid especial attention to young people; Nazi indoctrination was a key part of all school, college and University education. Textbooks were  rewritten to promote Nazi views; teachers who opposed Nazification were dismissed.

The armed forces too were subordinated to Hitler’s will, the  oath of allegiance which had been been sworn to the Constitution was now transferred to the Führer personally.

The Nazi Party capitalised on nationalism and pan-Germanism.  Racial discrimination played a central role in Nazi policies. Nazi ideology asserted the superiority of the Aryan race, an ethnic group the concept for which was based on eugenics theories from the nineteenth century, and of which pure Germans were the epitome.  The intention of the Nazi Party was to achieve racial purity in Germany by using involuntary sterilisation, and later extermination, of sub-humans (Untermenschen).  Groups so categorised included ethnic Jews; the Roma people; Slavs such as Russians, Poles and Ukrainians; and all black and Asian peoples.  Races were arranged in a hierarchy that placed the master race (the Herrenvolk, i.e. all Aryans) of the national community (Volksgemeinschaft)at the top, with Slavs, Roma, Asian and black people ranked below them.  Jews did not even count as people.

Hitler’s promises to maintain law and order, generate employment and restore national pride were backed by very stringent and severe measures based on racial ideology. The Nazi Party officially labelled the Jews as especially being to blame for Germany’s economic and social problems after its defeat in the First World War. Jews were regarded as traitorous criminals, working actively to undermine Germany and destroy its racial purity.  Nazi oppression was not limited to Jews and Untermenschen, however. All political parties other than the Nazi Party were outlawed, and thousands of communists, socialists, social-democrats and others of independent political views were deprived of civil rights, harassed, imprisoned and often tortured.  Deviation from the Nazi norm was suppressed or eliminated. Homosexuality became a capital offence.

Religion too was targeted by the Nazis. Although Hitler had been brought up as a Roman Catholic, he rejected mainstream Christianity. The Nazi Party supported a policy of Positive Christianity. This removed those aspects of Christ’s teaching that Hitler disapproved of and introduced Nazi doctrines on race such as Aryan supremacy, and Nazi-perceived Nordic values, particularly the importance of individual heroic figures. A Reich Church was established based on this Nazi Christian policy and ordinary Germans were heavily encouraged to join it.  Although some Churches sought to reach an accommodation with Hitler, eventually serious frictions developed between them, especially over the treatment of the disabled and Jews, and they also began to be oppressed.

The Nazi state relied heavily on informers amongst ordinary citizens who welcomed the improving economy and rising standards of living under Hitler. Many spied willingly on those not regarded as being of the Volksgemeinschaft, denouncing them to the authorities.  Every street and major apartment block had an official Block Warden part of whose job was to keep an eye on their fellow citizens. Each German town and village had special boxes where denunciations could be posted to the Gestapo.

It is believed that between 1933 and 1945 more than 3.5 million people were sent to concentration camps, special political prisons where inmates were placed in harsh living conditions and abused physically and mentally to break their independence.  Many died or were physically disabled as a result, and most were broken in spirit. Eventually the German network of camps spread all across occupied Europe. 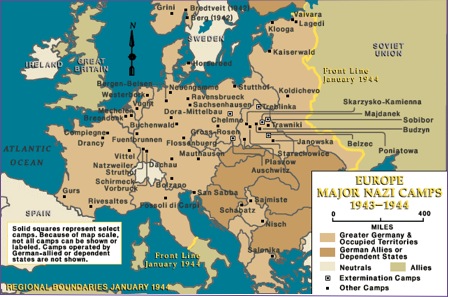 Implementation of Nazi racial policy consisted of two elements: sterilisation and segregation. Later, segregation was replaced by extermination. The Nazis initiated forced sterilisation of the hereditary ill. Then involuntary euthanasia was carried out on about 200,000 mentally and physically disabled Germans in order to eliminate those who might pass-on defective genes to subsequent generations.

Racial segregation was practised against Jews from the very beginning of the Nazi state.  Oppressive laws were passed banning Jews from a wide range of jobs and professions, excluding them from formal education, and from medical and social welfare support. Sexual relations and marriage were forbidden between Jews and non-Jews. Very quickly, segregation became racial expulsion. Pressure was put on Jews to emigrate. Untermenschen also came in for oppressive attention but there were few of these in Germany itself and many were foreign nationals who escaped the worst attentions of the Nazis.

When Germany went to war in 1939 and occupied Poland, emigration became untenable: there were more than three million Polish Jews, and in any case most borders were now closed. At first it was decided to deport all Jews to the island of Madagascar, controlled initially by Germany’s puppet state, Vichy France. But this plan too was untenable so long as Germany remained at war and the island was unreachable.

The Nazis began to deport Jews from German-controlled areas and, after attacking the Soviet Union in 1941, from Russia, to ghettos in Poland.  This could only be a temporary measure, however.  Although overcrowding and desperate conditions led to a high mortality rate, nevertheless millions of Jews and other ethnic undesirables remained. It was decided to eradicate all Jews systematically, a process which became known after the war as The Holocaust. 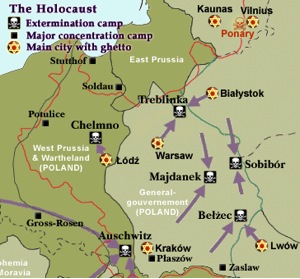 Mass murder began in Russia in 1941 as part of a war of racial extermination waged there by the Nazis from the outset. Large-scale executions of Jews, Poles and Russians took place, most frequently carried out by four special Task Forces (Einsatzgruppen). A total of 1.5 million Jews were murdered in the occupied Soviet territories, with eager help from local anti-Semites. Almost simultaneously, mass executions were initiated in six main extermination camps in Poland. Smaller camps were set up at Warsaw and Janowska; mass executions  took place at Ponary, at that time also in Poland. In addition there were small camps at Minsk in Belarus, and at Jasenovac in Yugoslavia. At least three million Jews perished at these sites. To this should be added another one and a half million Jewish victims who died in the concentration camps, the ghettos and elsewhere as a result of hunger, over-work, physical abuse and executions.  Five million non-Jews died as a result of Nazi racial policies.